We left Washington and headed into Oregon via this bridge that is just over four miles long. 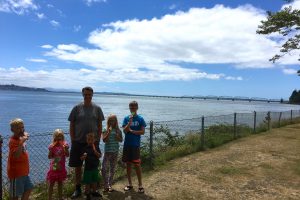 Crossing the bridge was an event itself, but just after crossing we went to the to the Astoria Column where we enjoyed some incredible views of the Columbia River, the Coast Range, and Young’s Bay.  It was windy, but worth the time! 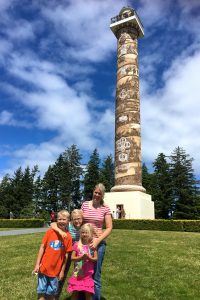 We didn’t realize we would be so close to the Lewis and Clark National Historic Park so it wasn’t in our schedule, but we took an hour or so to stop and see the replica of the fort where the Lewis and Clark team spent the winter before heading east.  We could have spent a lot longer there.  The fort was interesting, but the best part was that they had rangers dressed in time period clothing to answer questions.  The kids tried writing with real quill pens and ink.  It was quite the skill. 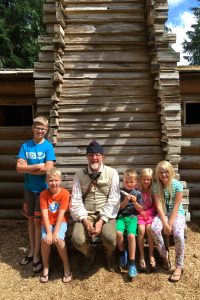 Personally I can’t stand the movie Goonies, but Josh is a huge fan and showed an edited version to the kids the night before we visited Cannon Beach, where part of the movie was filmed.  Cannon beach was the busiest place we visited the entire trip.  Of course it was 4th of July weekend, which I’m sure contributed.  It was a beautiful beach, but the fun thing there was that we saw hundreds of Jelly Fish. 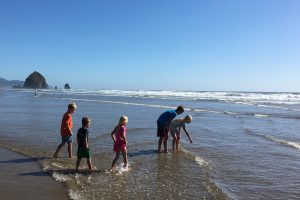 We loved spending the nights of July 3rd and 4th at the Shorewood RV Park just outside of Rockaway Beach.  Once again we were a 60 second walk from the beach, and the caretakers of the RV Park were so good to us.  They let the kids choose from dollar store toys to keep every day.  They had beach toys for us to use and a fun picnic aria near the beach.

Our first evening there the kids couldn’t get out to the water fast enough.  The groundkeeper was out there flying his kite and let our family take over.  Caleb and Josh especially loved flying the kite.  We also got out our bikes and rode them on the beach.  It worked quite well on the wet sand.  Andy loved hitting his brakes and falling off.  It was a beautiful evening.   It felt like and evening that would be straight from the movies. 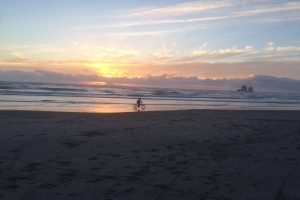 We spontaneously decided to rent a boat and go crabbing on the morning of the 4th of July.  We had the boat for two hours and caught nearly a hundred crab. Unfortunately they had to be male’s and quite big to keep.  We got a lot that were within ¼ inch of being big enough, but only one true keeper.  We did get to eat the keeper.  Cara was excited about it.  She held his bucket, licking her lips most of the morning.  We also saw two beautiful bald eagles and a beach of seals.  It was a really awesome way to spend the holiday morning. 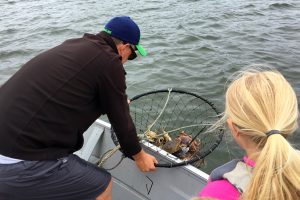 I LOVED watching fireworks on the beach.  The air was a little too cool for me so we started a fire and roasted marshmallows while we watched fireworks as far as we could see in both directions.  It was really incredible.  People spare no expense in their personal firework shows and we were the benefactors. 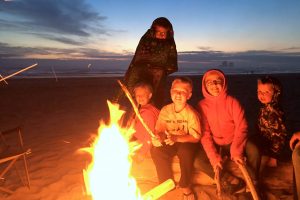 I felt like a trip to the Oregon coast wouldn’t be complete without some tide pooling.  We weren’t in a location to see the best of it, but we got up early enough on our final day to see many starfish at low tide.  It was just one final adventure at the beach. 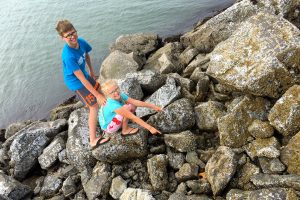 On our way out we passed the Tillamook Cheese Factory where they have self guided tours and samples.  We weren’t in a hurry so we stopped and enjoyed watching some of the cheese making process through glass walls.  Once again we benefited from having the RV by getting three quarts of ice cream and eating ice cream three times on the way home rather than getting a scoop each for twice the price. 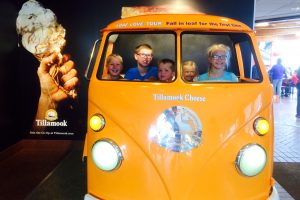 The scariest part of our adventure happened on our way home at the Columbia River Gorge.  It was the 5th of July and the waterfall parking lots were packed.  The roads were at a stand still and we learned the hard way that the bridges are not made big enough for two RV’s to pass.  Luckily the only damage we experienced was our mirror being pulled off.  I stopped and pulled as close to the edge as I could but the guy passing us scrapped along the edge on the other side the whole way.  It was quite the adventure.  We did luckily find a parking spot and went on a little hike to see some falls.  It was good to shake off the jitters. 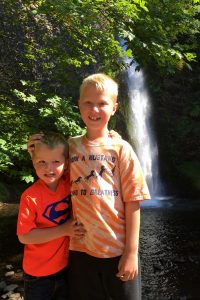 That night we treated ourselves to a beautiful Italian dinner on the Columbia River to celebrate our anniversary and our safe travels.  What a wonderful trip!!